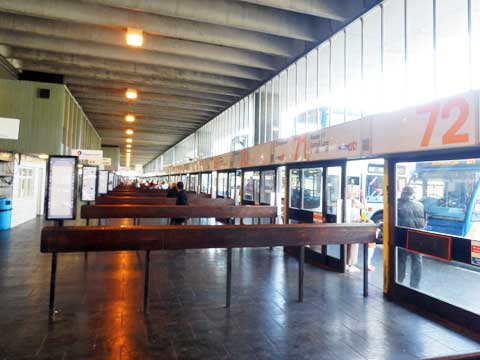 Designed to bring airport comfort to your local bus station.

Yesterday, 17th Dec, Preston council cabinet sat and voted to demolish the Market Hall, Market Car Park and Lancastria House.  The bus station vote was that it should be demolished in principle but a number of alternatives will be looked at before making a decision in the new year.

This seems a reasonable outcome for the bus station at the moment.  Although Lancastria House is an attractive and characterful building and it is a mistake to demolish it.  Can’t say I’ll miss the Market Hall or its car park.

The council Chief Executive Lorraine Norris said Preston only needs a 36 bay bus station.   This would appear to be true at the moment although Lancashire County Council are planning to spend a lot of money on bus routes into Preston.

The bus station has a number of foibles.  Buses need to reverse out and it is quite a walk from the shops. Many years ago Corporation buses terminated outside the Harris and Miller Arcade and this would seem a better place, although having an exchange terminal for those who get off the other buses is a benefit.

The new bus station car park is also awkward to get in and out of and the ramps between levels are very tight.  Otherwise it is an excellent car park, the one I use when I visit Preston.

Halving the bus station capacity seems very simple.  Just block off one side, all buses could use the Preston Bus side.   The other side could be developed maintaining the car parks and leaving one frontage.  In America traditional city centre building frontages are maintained but just behind is a high rise office block.

As for buses reversing, there is such a lot of space on the concourse that an adaptation could be possible although it seems a step of imagination.

The other worry that could smooth the loss of the bus station is the design of the proposed replacement.  It’s hard to believe it will be anything but a low budget design if funding is so hard to come by. This is a bad time where the council is claiming to be squeezed by running costs in the existing bus station and then squeezed to pay for a replacement.  There is a fear that people are making long term decisions based on short term criteria.

Overall the council has got itself in a mess by waiting for the Tithebarn Project and allowing the bus station to deteriorate. Similar to Blackpool who waited for their casino and ended up with a car park.  Yet Blackpool claimed special hardship and got a lot of money for a new prom and tram system and the council borrowed £20m to buy the Tower and £30m to resurface every road in Blackpool.  Why can Preston council not make more effort to save the bus station.

This entry was posted in History, Made in Preston, Road, Uncategorized. Bookmark the permalink.