Preston Bus Station to be destroyed by lack of vision 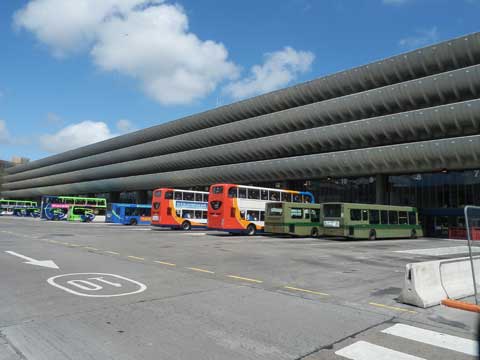 Demolition of Preston Bus Station will leave an anonymous space where once was a late 20th Century icon.

Preston Bus Station destroyed by vandals might be a bit hard.  Yet Preston Council have neglected the building and then announced that it will cost too much to refurbish. Even though it is one of Preston’s main features.

Quoting huge costs the council seeks to justify its case. Yet in nearly every case it looks like the council has opted for Gold Plated Solutions Ltd to do the work and since when did a council pay £2m interest on a £23m loan.

The council has let it deteriorate so it doesn’t look so good at close inspection and many will be taken in by that.  Yet from a distance it becomes more iconic with every passing year. Along with the Harris Museum and St Walburge’s it is surely a symbol of Preston and how it was prospering beyond the cotton era.

It is situated a mile from the railway station so if they said it was being moved then maybe that would increase the case. Or if they said something equally magnificent was going in its place. But no, this end of the centre is going to become a small bus station and a car park.  Welcome to Preston or is it Bury or Blackburn.  Maybe like Blackpool it will have no bus station and no-one knows where the buses are and they jam the streets.

There might be an option for knocking down half of it to leave a shortened building although no doubt that would be said to cost even more.

There is something solid and magnificent that adds to the claim to City status about the bus station. The other towns will be laughing and saying no Tithebarn, no iconic bus station, Preston is falling, come to us.

This entry was posted in History, Made in Preston, Political, Uncategorized. Bookmark the permalink.