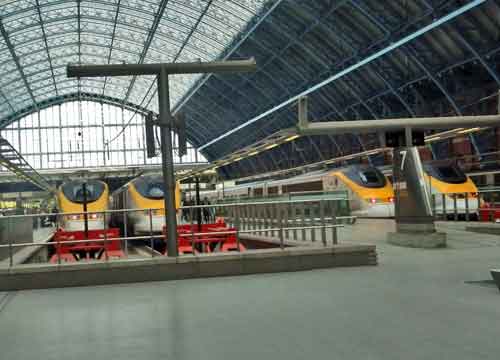 The high speed rail route beyond Birmingham has been announced today.  The northwest terminus will be four new platforms at Piccadilly in Manchester and there will be a parkway station at Manchester Airport.  A link to the West Coast Main Line will be from Manchester to Wigan.

There is a debate about how the line will reach Scotland or if it does at all.  If it came via the West Coast it would be likely to be on a new track which some have said will create a new station to the east of Preston.  This is not part of High Speed 2 and would be an additional route, perhaps High Speed 3.  It might also depend on a referendum result in Scotland.  The SNP government strongly support a high speed route, but there could be a question about who would pay for a line beyond a large English city.

The date for completion of High Speed 2 is 2032, and by then other changes will take place.  A decision on extending the line would be hoped to be well before then although the annual spend is limited so continuation could possibly only be after 2032.

That brings on yet another debate,  why does it take so long to build.  Some say it should be built at the same time as the southern section.  That certainly seems a great idea but will cost more per year to build and annual cost is a big factor.  The current build programme has been delayed because the London Crossrail programme is taking all the major rail infrastructure budget.  It seems obvious the high speed rail programme needs pulling forward 10 years.  Get a move on, we need it now!