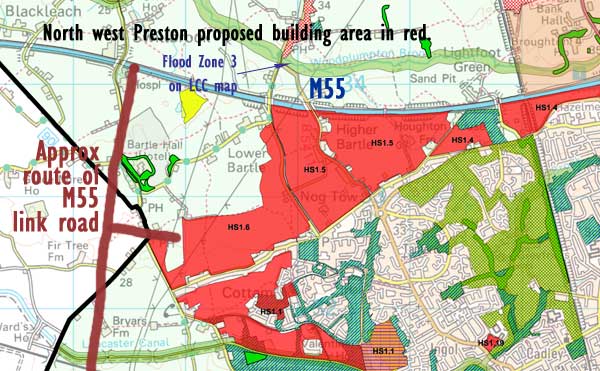 The Preston Draft Master Plan will be published for consultation on 20th January 2014.

It is said to contain plans for 5,000 homes in north west Preston along the south side of the M55 motorway.  These will be in the form of a ‘garden city’ which might be influenced by new regulations being promoted.

The new Regulations are expected to require that developments must have ponds and streams to absorb heavy rain so it isn’t all dumped immediately into the drains causing them to overflow and flood.  It’s proposed that maintenance of the ponds and streams will be paid by an annual levy on the residents in the new developments.

This area is good countryside blighted by the M55 which provides the excuse for not feeling too strongly about it.  Although it’s well away from employment areas so will be in need of roads with commuters expected to pile onto the M55 or into Preston Centre.  From that point of view 5,000 houses, perhaps 13,000 people, sounds excessive.

It’s downwind of the nuclear processing plant as well.

Whether the next step might be to build north of the M55 will cause concern about impacting the pleasingly rural feel of Woodplumpton.  Also surely it isn’t a plan to reduce the solid Conservative majority for that parliamentary seat by changing its character.

Preston Council and Central Lancashire City websites contain the documentation leading up to the decisions and probably will contain the draft Master Plan later this month.  There is a lot of reading there, could do with a simple summary.

This entry was posted in Made in Preston, Political, Road, Uncategorized. Bookmark the permalink.