Disappointing news that J.Fishwick of Leyland will cease trading after 108 years.  The last bus service was on Saturday 24th October 2015.  An announcement on their website said that anyone who had paid a deposit on a holiday would be contacted separately and the payment was covered by an insurance bond.   That must be relief to anyone who was worried about losing their money and it’s certainly to their credit that the company took this measure which must have cost them to take out.

An announcement reported in the Chorley Guardian said cashflow was the problem and it was becoming more difficult for small companies to operate.   Stagecoach have taken over the routes and a bus labelled Stagecoach Merseyside was operating last week.

There are quite a lot of small companies operating buses and they do seem to move in and out of routes using small buses. It doesn’t look easy and there have been threats to remove subsidies for rural routes.

Fishwick began trading as a haulage company in 1907 but soon moved in to buses and in the 1960s into holiday trips.   There are several buses in preservation carrying the green livery, one usually in the British Commercial Vehicle Museum in Leyland.  Quite a surprise, sad feeling coupled with some annoyance to find they’ve gone.   The world is a less varied place without them. 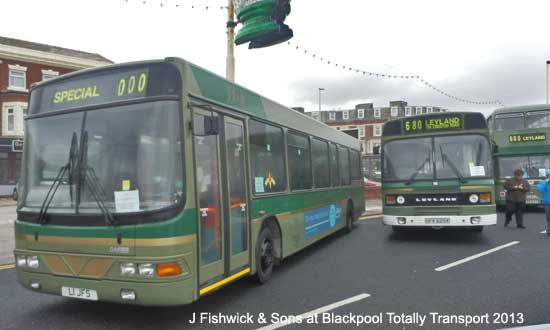 This entry was posted in Made in Preston, Road, Uncategorized. Bookmark the permalink.